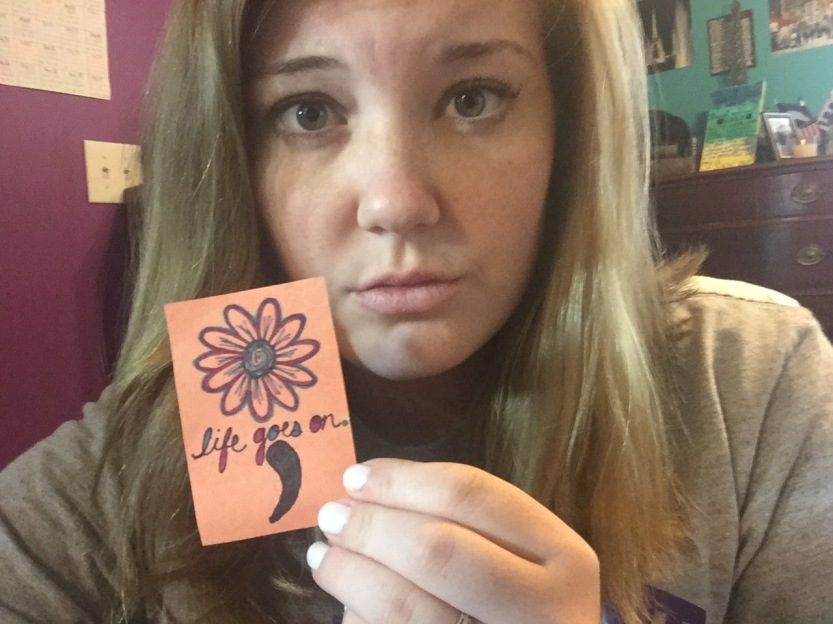 If you have been following my blog from the beginning, you may feel like a part of the story was missing.  And there was, until now.  This is the story that precedes Crushed Car and Glass Shards.  In all honesty, I was scared to type this blog.  I have put it off for months, but this is the story God has wanted me to tell for a long time.  I kept thinking about how I should phrase it or kept saying to myself, “I’m not ready!”

It’s not easy to look someone in the eye and tell them you were suicidal at a very young age.  It’s not a piece of cake to let people know that you have dealt with depression.  Since it is not something that rolls off the tongue, I have to confess it.  Too many nights I have not been able to sleep because it has been on my mind.  I feel like Jonah, but instead of being swallowed by a whale, God won’t let me sleep until I finally do what He has asked me to do (Jonah 1: 1-17, 2: 1-10).

On December 24, 2010, I sat on the train trestle (a bridge) behind my house with a tear stained face.  No smile graced my lips.  I was motionless and numb.  I remember wanting to jump so badly, because I no longer wanted to live.  I was only 13 years old, and it was Christmas eve morning.

The only reason I could not follow through was the fact I would be selfish.  As a little girl, I was incredibly selfish and thought the world revolved around me.  I was often scolded for it, and when my parents called me selfish, it stuck with me for a long time.  So, I tried putting others before myself.  It got to the point where I began to forget myself and neglect what I needed. With no self-esteem, I would punish myself for being bad.  All I wanted was to be loved, and it became an obsession to be perfect all the time.

That Christmas I was hurting and had been experiencing a case of bullying at school.  Teachers had  pulled me aside and asked what was going on.  I remember having to tell them in painstakinly detail what was being said to me and I prayed it would get better once they talked to the kid.  It didn’t.

The suicidal thoughts may have popped up because of the bullying, but there was a much deeper issue at hand.  I had no respect for my own life.  I cared nothing about what would happen to me.  The only reason I couldn’t do it, and never will be able to, is the fact I knew it would devastate my family.  I never want to hurt anyone else, and I am very conscious of this because I have been hurt time and time again.

While on that train trestle, I kept picturing what life would be like without me.  Ever seen the movie,  It’s A Wonderful Life?  Well, in this case I wouldn’t be erased from everyone’s memory.  All I could imagine was how heartbroken my mom would be, and how my dad would try to hold the rest of the family together.  What would it do to my brother?  Grandparents?  Cousins?  Aunts and uncles?

I accepted Christ into my heart at seven years old.  There has never been a doubt where I was going once I died, and that was why I didn’t care if I still lived.  Heaven is where all the broken become healed, physically, mentally, and emotionally.  I just wanted all the hurt to stop.

Benedict Cumberbatch, as Sherlock Holmes, put it the best way:  “Your life is not your own, keep your hands off it.”  He questions how someone can take their own life when it is everyone around that person who will miss it.  It’s taking your life away from everyone else.  So, how could I possibly do that to the people who love me the most?

As I sat on the train tracks, contemplating everything, I heard my mom call me from the house.

So, I got up and went back home.  There was no way I could do it.  Not to her.  The following year, the bullying subsided and things were better. I stopped thinking of ways I could kill myself, but the fact remained that I didn’t care whether I lived or died.

I hated myself.  I could not forgive myself for anything.  I was incredibly hard on myself whenever I messed up in anyway.

A few years had passed and then I experienced another dark period. I was a sophomore in high school and I had just turned 16.  Things were not going well for me socially at school, and then I experienced for the first time, a death of a loved one.  This is where See You Again comes in.  The depression returned and was fighting hard to take me over.

I was a lonely kid all throughout middle school and high school, and I still struggle with it at times.  However, I adapted and am proud to say that I am much stronger than I used to be.

I’m sure it was not fun to be around me.  I was never the life of the party, and I just didn’t find things funny that other kids my age did.  I was the outsider looking in, and I didn’t know how to be okay with it.  I am not the type of person who can be around people all the time.  At a young age, I started asserting my independence and it has been that way ever since.  Being alone was a habit and I even pushed people away at times.

Some may call it a gift, or a curse depending on your view, but I feel things deeply.  Maybe it’s a side effect of being an artist.  When things were not going well, it seemed to weigh heavier on me than others.  My senior year of high school I seemed to go down another heavy path.

After my wreck, like I said before, it took me a long time to forgive myself.  But it was what woke me up eventually.  If God kept me from jumping seven years ago, and safe from the wreck in 2015, then there is a reason.

Maybe it was for me to share my story.  Maybe there is something even bigger waiting out there for me.

When I first planned to share this story, it was several months ago.  I knew I had to tell my parents first, and I was terrified.  Back then, I was prepared to tell my family and church, but then my world started to turn upside down once more.

This summer has not been the easiest.  Death struck again and took another grandparent, a good friend and classmate, and a childhood pet.  I kept waiting for the darkness to drag me down again, but it didn’t.  Of course, I was heartbroken over all that had happened, but I did not succumb to suicidal thoughts.

If I shared this story in the midst of all the heartbreak, then I was scared I would become a hypocrite and retreat back into my darkness.  When that did not happen this time, I realized how much stronger I am now.  Maybe the past seven years was preparing me for moments like these.

All I know now is that I want to live.  Because I am a child of God, I am more than enough.  Because of Him, I can find the strength to post this.  Publishing something that only a handful of people knew about me is nerve-racking and oh so vulnerable.  There may be questions, and people may look at me differently, but I’ll cross that bridge with God by my side.

If you feel alone, and that no one would care if you died, you’re wrong.  It’s a lie.  God loves you so much, and so do I.  There are billions of people in this world, and many are good people who would care so much.  You are not alone in what you are feeling, and depression affects more people than you believe.  I’ve been there.  I used to think I was alone and that no one could understand.  God will always listen to your prayers, and if He hasn’t responded, remember the teacher is always quiet during the test.  Your battle is not over yet.

In the picture for this article, is a flower and semi-colon.  If you have heard of the semi-colon project, then you are aware that it is a symbol for suicide prevention.  A semi-colon is where the author could have ended the sentence but chose not to.  Choosing to end your sentence with a period will not stop life.  Life goes on without you, but it doesn’t have to.  I’m choosing to live life with semi-colons, even when I may want it to stop in the moment.

God has read my whole story, and I’m still in early chapters.  I don’t want to shut the book before I have read the whole thing, and then I can meet the author in Heaven.

9 thoughts on “Why I Decided Not To Kill Myself”